skip to main | skip to sidebar

Nick tells Rigo what he really thinks about Rigo's feelings for Troy.
Posted by Troy Tooner at 9:56 AM 29 comments:

Rigo gets a little surprise behind door number 1!

And yes, Jorge and Eddie DID break-up, but what's one to do at a wedding after a few glasses of champagne?
Posted by Troy Tooner at 8:01 AM No comments:

The Abbey To Become A Chain

In partnership with SBE, Cooley intends to build Abbeys in cities across the country, and has spent much of the past year scouting locations including San Diego, Phoenix, Miami, New York City, Chicago, Atlanta, San Francisco, and Las Vegas; the plan is for the first new Abbey to open in Chicago within a year.

Bristling at the notion that he’s creating a “chain” of Abbeys -- “This is not T.G.I. Friday’s,” he sniffs -- Cooley points out that the business will be not franchised but wholly owned by his partnership with SBE. Cooley prefers to describe his current project as “taking the Abbey national” or “replicating the soul of the Abbey.” He embarks on this quest even as the gay nightlife industry seems to be in steep decline. During the past year, clubs such as New York’s Roxy and Boston’s Avalon have closed. Bar owners say the Internet is slowly killing their business as cruising continues its migration to the virtual realm; and a new generation, coming out to an increasingly accepting -- or at least (in marketing terms) “gay-friendly” -- world seems neither to need nor want to socialize primarily at gay bars.

Cooley believes the Abbey, as a national brand, could reinvigorate gay nightlife -- and his strategy for doing so appears to involve toning down the avowedly gay part of that experience. But how straight-acting does gay nightlife need to be in order to survive?

I've spent WAY too much time and money (have you seen their drink prices???) at the Abbey over the years. And being from Chicago, it will be interesting to see how they translate this mostly outdoor bar into a Chicago place. I wonder where they're going to put it. In the old "Boys Town", which has become way straight yuppie, or the new up and coming gay neighborhood, Andersonville, my last Chicago address. Whereever they decide to open, they're sure to give Sidetrack a run for it's money!

Of course, I did predict this a couple of years ago with this strip from Feb of '06. Troy #145 "The Gay Demographic"
Posted by Troy Tooner at 7:49 AM 1 comment:

Ray and Derrick celebrate their new union with their loving family.
Posted by Troy Tooner at 9:26 AM No comments: 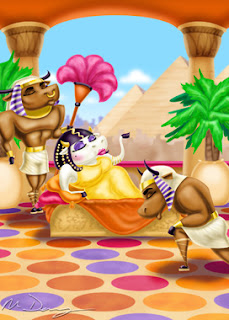 My girl's gone international and made herself a couple of new friends.
Posted by Troy Tooner at 5:48 PM No comments:

I read this bizarre story by Wayne Bessen at PageOneQ.com about an ex-gay camp where the guys participate in, among other things, blind-folded, naked hiking, beating a dead chicken while naked, and reaching out and grabbing your "brother's" dick. And yes, they use the word "brother". Sounds even wierder than the ex-gay, Brother Jeff story-line I wrote about a couple of years ago, starting in Troy 124 "Lay Your Hands On Me." And to think I was making it all up. Sometimes the truth is stranger than fiction. And real Brother Jeffs and Brother Dicks are really, really scary!

Here's just a taste of the whole story:

The alternative publication, The Houston Press, uncovered a letter Michael Scinto wrote to the Madison County Texas sheriff's office, just prior to committing suicide allegedly as a result of the boot camp. The Scinto family has filed a lawsuit against The ManKind Project, while the deceased man's letter to the sheriff claims the New Warrior program practiced bizarre rituals that include:

Blindfolded walking tours in the nude

In the Houston Press article, the wife of one of the men who attended discussed why her husband eventually rejected the group.

"So, everyone was sitting Indian-style in a big circle in the lodge when the man leading the group said, 'if you wish, you may reach over and grab your brother's dick. If your brother doesn't want your hand there, he can remove it.'”

Wayne Besen writes in 365gay.com that the New Warriors group is NOT ex-gay and does attempt or believe that one can change one's sexual orientation.

...New Warriors has a large gay following and many who attended consider it helpful to their coming out experience. I received more than 25 letters from gay men who said that the program helped them accept their sexual orientation.

“The program helped me become a better husband,” wrote another gay man from the Washington, DC area. “As I knocked down the walls, I became more comfortable with myself and able to give 100 percent to my partner. The program literally saved my relationship.”

So, is the ManKind Project’s New Warriors program gay affirming or does it cater to ex-gay fringe groups?

I posed this question in a conference call with the group’s Executive Director Carl Griesser. Well-known gay author Joe Kort - a vocal proponent of the organization – was also in on the conversation.

Griesser said he was troubled by the way ex-gay ministries had been promoting his group and that his organization did not support the ex-gay cause. He suggested they had misinterpreted what his group meant by instilling masculinity in men.

“There is a difference between masculinity and sexual orientation,” Griesser said on the call. He pointed out that almost every New Warriors training session has at least one openly gay or bisexual man. 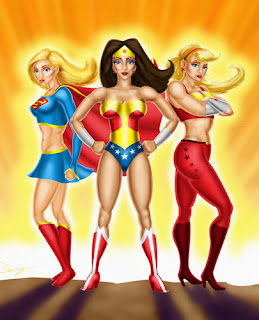 A few weeks ago, my boyfriend asked me to do an illustration of his favorite super heroes for him. I've never worked in super hero comics, my style is much looser, but I figured I'd give it a shot. Here they are, Toby's three favorites; Supergirl, Wonder Woman, and Wonder Girl.
Posted by Troy Tooner at 11:00 AM No comments:

Troy Tooner
West Hollywood, CA, United States
I'm a fun, laid back, sensitve guy with a big heart and a twisted sense of humor. I do illustration and animation and have been doing the comic strip "Troy" which appears in "fag rags" all over the world for the past seven years. You can check that out at http://TroyComics.com. Oh yea, and I'm damn sexy and not at all arrogant or anything. Swear!